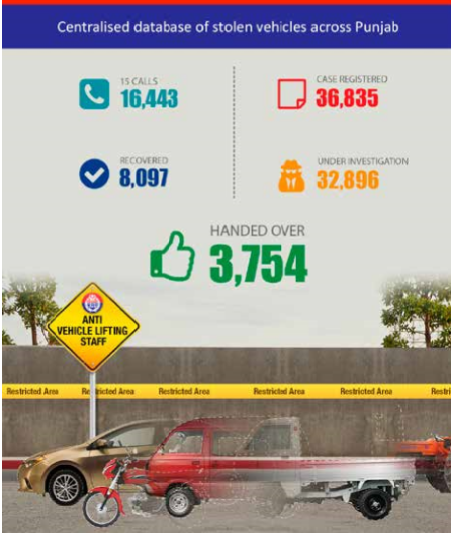 The absence of centralised record of stolen vehicles in the Punjab posed a great challenge for the police. Each district had its own record which was not integrated with other districts. There was no mechanism to verify vehicles at check posts which made it quite difficult to control vehicle theft and hindered recovery of stolen vehicles. The AVLS is a web application which maintains a province-wide database of stolen vehicles. It includes theft reporting, investigation, recovery, Forensic Lab Test and handing over of vehicles to its owners according to court orders. This application is integrated with an FIR system, Excise and Taxation Department and the Punjab Forensic Science Agency (PFSA). It also provides a centralised monitoring system with an SMS alert and a comprehensive reporting dashboard. With this centralised database, investigation of car theft cases has become efficient and effective. It has helped police capture many criminals and recover stolen vehicles. Because of this centralised database, a car stolen in one district can be traced if it is in another district. As many as 36,835 car theft cases were registered in this system and 8,097 vehicles were recovered since the programme was launched.