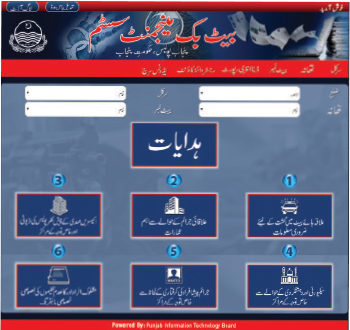 Officers of the Punjab Police are assigned beats for monitoring and surveillance. There are four or five beats in the jurisdiction of each police station and officers are assigned one beat each. Traditionally, intelligence was collected through these beat officers. A beat officer was required to keep a record of all incidents, crimes and citizens requiring extra security in their beat. These officers used to maintain a Beat Book at their police stations. However, there  was no central database where data of beats from police stations of various districts could be kept and retrieved easily. PITB developed an application for the Punjab Police which allows beat officers to enter details of their beats in an online system. Using this software, a beat officer can add his own data and view information on all other beats under the Punjab Police. The database contains a list of public buildings, known criminals, people under surveillance and other important details of a beat. This system is operational in all 36 districts of the province.

It has been instrumental in helping police device patrolling schedules and routes based on the intelligence gathered by this system. It contains detailed record of 3,598 beats across Punjab which comprise 259,675 total data items.