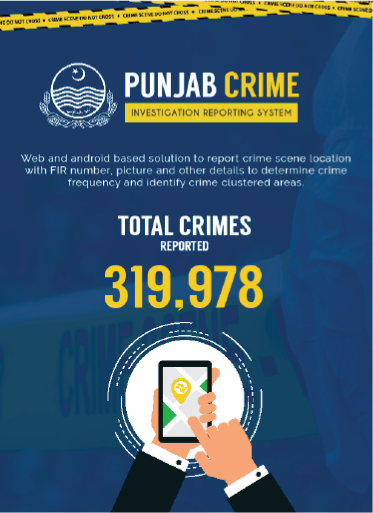 In the past, the Punjab Police had relied on traditional intelligence-gathering methods to identify pockets of crime. PITB developed a web and android-based application to capture the location of a crime scene with a First Information Report (FIR) number, pictures and other details to determine the frequency of crime in an area and identify similar crime clusters. When an investigation officer visits a crime scene, he enters the location in this mobile application and geotags the crime scene. The data is then displayed on a dashboard for analysis.

The system is operational in Lahore and is being rolled out in other districts gradually. The Punjab Police is using this system to identify areas with the highest number of crimes, take intelligence-based actions and plan campaigns accordingly. Details of 319,978 crimes have been entered with geotagged data in Lahore.