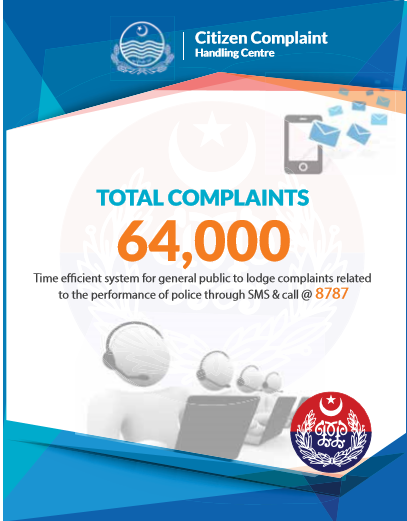 The Inspector General's office of the Punjab Police has a complaint cell that looks after the complaints files against police across the province. Previously, complaints were received through post or submitted in person. The complainant had to travel to Lahore and visit IG’s office to submit the complaint. It was a time consuming process with no traceability mechanism. There was also no mechanism to check the status of the complaint and its resolution. PITB, in collaboration with the IGP’s office, devised a state-of-the-art complaint cell through which complainants can lodge grievances through email, SMS and voice calls via a shortcode (8787).

A dedicated team of more than 25 workers addresses the complaints. It is an efficient, transparent and error-free process. A complaint number is sent to the complainant through the system. It is used as a complaint tracking number. The complaint is then assigned to a police officer who works on the complaint. The system provides an interactive dashboard and comprehensive reports. The management, in this case the AIG Complaints Police, has complete view of applications being submitted across the province. This system is operational across the Punjab and has proven effective and helpful for the police staff in keeping track of complaints and their resolutions. The project has also been appreciated by the general public. As many as 64,000 complaints have been logged through this system since its inception.