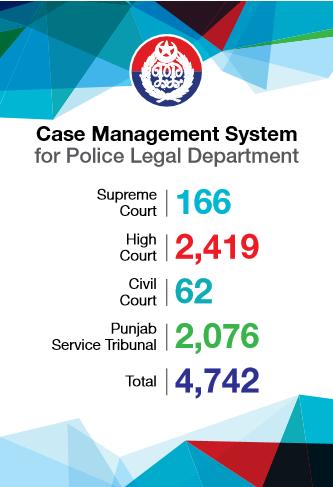 The Punjab Police has a legal department at Central Police Office (CPO) which deals with cases against its officials across the province. There are many types of cases against policemen. These include demands for registration of FIRs, changes in investigation teams or complaints against harassment by policemen. In addition, cases are also moved by police officials against the department for issues like delayed promotions or unfair dismissals. Officers of the legal department appear for hearings at various courts, submit responses and ensure compliance of court orders. However, the volume of cases is so huge that it often gets difficult for the police to track court dates and submit their responses within the stipulated time.

As a result, the Punjab Police is often penalised for contempt of court. In addition, there is no easy way to retrieve old case files because of poor maintenance of records. In a bid to resolve this issue, PITB developed an IT based solution which helps the Punjab Police to follow up on cases and court dates on time. Court cases are entered in the system with their respective hearing schedules, deadlines and compliance dates. The system automatically identifies actions which must be taken by the police in this regard. The system is designed to aid the legal department complete its tasks in an efficient manner. The system has remarkably improved the performance of the legal department. Police officials now know their court dates in advance which gives them enough time to prepare their cases. When a court date is near, the system automatically generates alerts through SMS to the concerned officials. In addition, a dashboard in the system provides a summary of the total number of cases being heard in various courts.