Pakistan is one of the only two countries in the world where polio is still prevalent. This has serious implications for the country’s public health sector. Usually, field officers are tasked with a door-to-door inoculation campaign. A key requirement for the polio vaccination drive was a mechanism to track the movement of field workers so that vaccination targets could be met. This need prompted the development of a mobile application for supervision of polio campaigns. This application allows supervision of field officers through geo-tagging techniques and categorisation of field data of children for pre-campaign reporting as well as post-campaign analysis.

The application enables the local administration as well as partner organisations, such as WHO and UNICEF, to access real time field data, for example, the number of children vaccinated, refusal cases, zero dose children and children not available during, as well as, after the campaign. The current system is active in seven high-risk districts of the province. The implementation of the system resulted in improved quality of supervision of field officers. The system enabled real time monitoring of field staff as per digitized micro plans. Heat maps were also made to highlight high and low coverage areas to relevant district authorities and partner organisations. 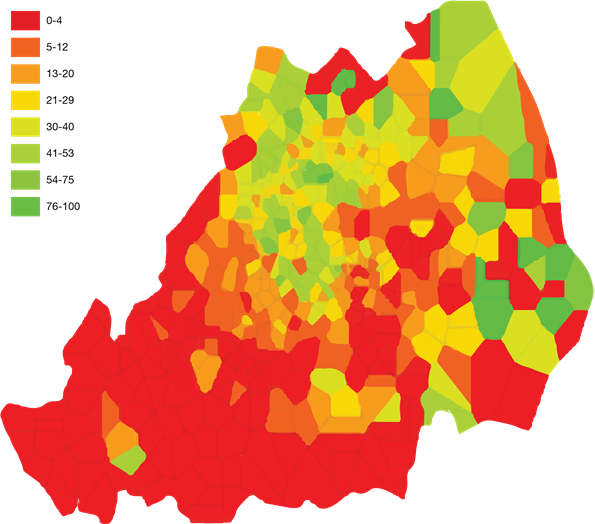 Lahore map with vaccination coverage as a consequence of the door to door campaign. The map helps district authorities focus on low coverage (red areas) to improve outreach. The map shows coverage in October 2016 which has improved since then.