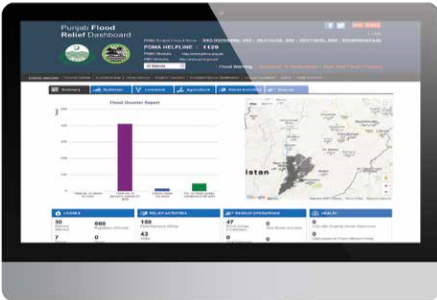 The system offers secure data logging for district officials, PDMA and associated departments such as Livestock, Irrigation, Agriculture, Health, and Rescue 1122. Based on this data, automated reporting templates are updated on a live dashboard depicting a summary of relief efforts. Through the help of SUPARCO and other independent sources of satellite imagery, the extent of inundation is also assessed remotely and monetary compensation can be disbursed accordingly. Another key feature of the system is the publicly accessible interface for viewing real-time weather and flood forecasts and flood warnings. Moreover, it has an early warning SMS system to alert residents of vulnerable/ low-lying areas in case there is a threat of severe inundation.

PITB’s role in disaster management further extends to managing PDMA’s 24/7 helpline 1129 for the public. The complaints lodged at the helpline can also be viewed in the same monitoring dashboard and any actions taken subsequently can be tracked. Besides this, a number of android applications have also been developed by the PITB to aid field teams conducting post-floods damage assessment surveys. These applications are equipped with geo-tagging and pictorial evidence of visited sites and can be uploaded for increased transparency of operations.