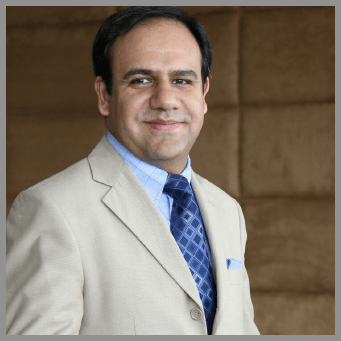 Dr. Umar Saif has extensive experience in academia, management, consulting and entrepreneurship in the IT sector. Dr. Saif received his academic training from LUMS, Cambridge and MIT. He did his BSc (Hons) from LUMS (1998), PhD from University of Cambridge (2001) and Post-Doctorate from MIT (2002). Dr. Saif has received Executive Education from the Harvard Kennedy School on Global Leadership and Public Policy in 2013.

In 2013, Dr. Saif was appointed the founding Vice-Chancellor of the Information Technology University (ITU), Punjab, where he is responsible for establishing a new publicly chartered university with programs in Computer Science and Electrical Engineering.

Dr. Saif has received numerous awards for his work. He was awarded Sitara-i-Imtiaz (SI), one of the highest civil awards by Government of Pakistan, in 2014 in recognition of his services to Pakistan. He was the first Pakistani to be named as one of the top 35 young innovators in the world (TR35) in 2011 by MIT Technology Review. He was the first Pakistani to receive the prestigious Google Faculty Research Award in 2011. He was selected as a Young Global Leader (YGL) by the World Economic Forum in 2010. Dr. Saif is a recipient of the MIT Technovator Award in 2008, Mark Weiser Award in 2008, IDG CIO Technology Pioneer Award in 2008 and Digital Inclusion Award from Microsoft Research in 2006. His papers have received best paper awards in ACM CHI 2013 and IEEE Percom 2008. During his doctorate studies, Dr. Saif was a Trinity College Overseas Scholar and Commonwealth Scholar at University of Cambridge. Dr. Saif received his PhD at the age of 23 years from University of Cambridge and first Pakistani to receive a PhD in Computer Science from Cambridge.

Previously, Dr. Saif worked and taught at the MIT Computer Science and Artificial Intelligence Laboratory (CSAIL) as a research scientist for four years, where he led the group that developed system technologies for project Oxygen — a US$50 million project sponsored by the US Department of Defense (DARPA) and an Alliance of IT companies. While at MIT, Dr. Saif also managed the multi-million dollar collaboration on future computing technologies between University of Cambridge and MIT, sponsored by the Cambridge-MIT Institute (CMI).

Dr. Saif worked as a fulltime faculty member at LUMS between 2006-2013. In 2009, Dr. Saif became one of the few professors who were awarded permanent Tenure by LUMS.

Recently, Dr. Saif has worked as Chairman of the Punjab Information Technology Board (PITB), heading all public-sector IT projects in the Government of Punjab since Nov 2011. During his tenure as Chairman of the Punjab IT Board, Dr. Saif launched several initiatives aimed at improving citizen services for police, high-court, city district government, health and education, especially using smartphones. He led the development of Punjab Innovation Policy in collaboration with Google and launched Plan-9, Pakistan’s first and largest public-sector startup incubator. He is largely credited with revamping the intermediate and matric exam system in Punjab, after a complete debacle of the exam system in the previous year. Under his leadership, PITB designed the smartphone-based early epidemic warning system that played a central role in fighting the Dengue epidemic in Punjab in 2012, and rolled out an innovative citizen feedback model for fighting corruption using technology. PITB also led the deployment of the first Automatic Fare Collection system for mass transit in Pakistan and automated the operations of the first Lahore Metro Bus System. Dr. Saif led the development of Pakistan’s first e-learning platform, making school textbooks in Punjab freely available online, augmented with interactive learning resources.

Dr. Saif has widely consulted for Asian Development Bank, USAID, World Bank and DFID on e-governance projects with the Government of Pakistan. He has consulted for ADB for the civil service reform program with Punjab Public Service Commission (PPSC) and S&GAD; DFID for evaluating the IT systems developed for the Faisalabad Devolution Program; USAID for the Rural Tubewell Energy Efficiency Program; and the World Bank for the Punjab Land Record MIS (LRMIS).